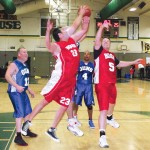 The second annual Guns & Hoses charity basketball game unofficially topped its fundraising goal of $2,000, thanks to a capacity crowd at the Tracy High gymnasium Saturday night.Tracy’s firefighters beat the police department team for the second year in a row by a score of 39 to 28, but organizers said the true winners were the children.

The event raised $1,500 of scholarship funds for local high school seniors Yordon Coss, Alejandra Manriquez, Viridiana Inguanzo and Ross Anderson; and $500 for the Drug Abuse Resistance Education program at local schools. The four students were chosen as winners of an essay contest about goals for the future. Their entries also contained recommendations from community members.

Tracy police officer Rich Graham, who shared organizational duties of the event with Michelle Elmore and Christina O’Neal, said the final figures should be finalized by Monday, April 9.

Graham said although it was not fun losing to the firefighters, he said everyone had a good time and really enjoyed playing.

“Once you play in one (game), you get those competitive juices going,” he said.

The captain of the firefighter team, Capt. Paul O’Neal said the key to the game was raising money for the local charities.

“The event worked out really good. A lot bigger than last year and think it will get bigger in years to come,” he said. “It’s always nice to win, but that’s not always why we play.”

Describing the win, O’Neal said, “It’s more bragging rights and we get to hold onto the trophy,” which will be on display at the fire administration building on Central Avenue. Saturday, March 31st 2012, at the Tracy High Basketball Gymnasium , the Tracy Firefighters will face off against the Tracy Police Department in a charity basketball game that raises money for the "DARE" program and the Tracy Public Safety Scholarship Fund. Tickets will be on sale at the door for $8. Doors open at 6:00 for a BBQ dinner and tip off is at 7:15. Hope to see you there. The Tracy Firefighters Crab Feed is coming this Febuary 17th from 6pm to 11pm. Ticket info to follow.
Tracy Firefighter's Charity is a non-profit organization whose mission is to use the resources available to us to provide as much as we can to the community we serve. 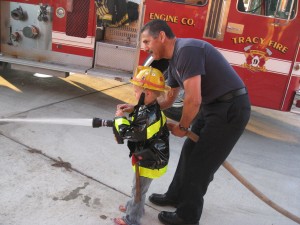 Taking Applications for Donation
Click on the "Application for Donation" tab above to fill out a donation request. Thank you TFFC
Blogroll
Links
Slideshow

Warning: Invalid argument supplied for foreach() in /home/tracyf6/public_html/wp-content/plugins/visual-form-builder/public/class-form-display.php on line 241